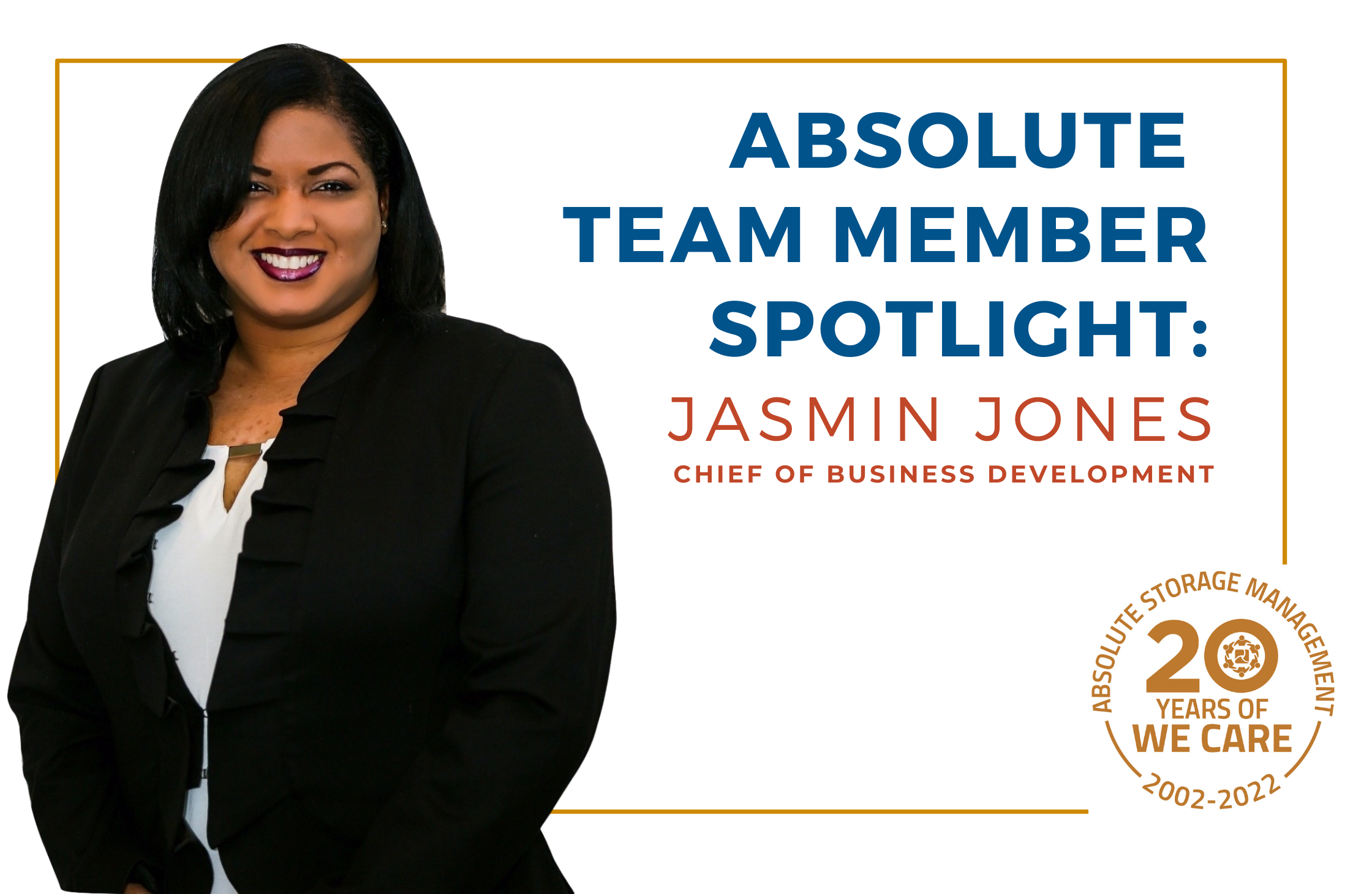 We’re celebrating our 20th birthday! And in the spirit of celebration, we are spotlighting the heart of our company: the Absolute Team. In today’s blog post, we’d like you to meet Jasmin Jones! Jasmin is the Chief of Business Development for Absolute Storage Management (Absolute) and has been with the company for 15 years. Learn more about Jasmin and how the company has grown during her tenure.

Question 1: When did you start with Absolute?

Question 2: How have things changed or stayed the same for you over the course of your career with Absolute?

Absolute was not my first rodeo in storage. I’ve been in storage for about 17 years. Scott was the first person I met, then Matt and Michael a little bit later. I managed one property, but they were growing. And there was a property that was close by, and they asked me to be the general manager of two locations. And then Absolute kept growing, and they said to me, “We’ve got another opportunity for you…”

I came on right when they were on that inflection point of growth. So every time they grew, it was that We Care culture, they came to me and poured into me and asked me to grow with them and I was up for the challenge.

I became a Regional Manager and I can remember Matt asking me in a review some years ago, “What do you think you want to do next?” I said, “Probably what Michael does,” and as soon as I said that I thought, What a fool. Why would you say that? Because my personality is pretty reserved and quiet and observant, Do you know how many people…you gotta talk to people! And Matt didn’t even blink, he said, “We’re gonna try to make that happen.” It wasn’t immediate, but he never forgot that. There were times when I hoped that he did (laughs), but he never did. I remember them calling me one day and saying, “We’re ready to pull that trigger.”

I believe in Absolute. I believe in the guys that created this company. It never feels like work. I can’t think of a time when [Scott, Matt, or Michael] have not done what they say they are going to do.

Question 3: How has Absolute changed or stayed the same over the course of your career?

I am very blessed in that I have seen [the We Care culture] right from the very beginning. Matt, Michael, and Scott have set that tone that they care. They poured into me. I was no different than any other manager when they walked into the property that I was managing. They didn’t know me from anybody else. And they really just believed in my abilities and my skillset. They developed me into the person I am today when I didn’t see myself through the same lens that they did. So the We Care culture has been consistent since day one.

Question 4: What is your favorite memory with Absolute?

Oh my goodness. My favorite memory with Absolute…(laughs)…There was an Ops meeting where we went horseback riding through what I would call rough terrain. (Laughs more) It was funny because nobody was really experienced. Matt and Scott suited up with these helmets on and everything, so safe. And we’re all looking at them like, “God that is strange,” but it was really wise and smart. But it was how everyone at first was like, “What are you doing?”

It was also the trip where I learned that chickens do kinda fly. (Laughs) Because I saw all these birds in the trees and I asked, “What kind of birds are those?” and everyone looked at me like, “Where are you from? Those are chickens.” (Laughs) It’s just those little bonding moments.

But my most rewarding memories have been in this role [as Chief of Business Development]. Because I know that if I do my job right, it creates another potential opportunity for someone else to get promoted. And their life changes for the better, whether that’s financially or just having confidence [in themselves and their job]. For some people, work is what they have. I take for granted that I grew up with a village of parents and grandparents – that traditional what we consider American culture. But for some people, Absolute is that village. So if I can do my job correctly, it creates opportunities for people’s lives to change for the better.

Question 5: If you could sum up your time with Absolute in one sentence, what would it be?

They do what’s right rather than what’s popular, which has made all the difference.

Question 6: How do you see Absolute growing as a company in the future?

I think there will be some compression in the industry as big REITs continue to buy up the mom-and-pop shops, but because of all the great team members and the core of Absolute, we will continue to grow. I think the future is bright because we have very bright team members. The sky is still the limit despite potential compression.

(Laughs) I was a student at the University of Florida when I was 20. I was living that UF football gator life. I was studying business finance, never thinking that self-storage was a thing (laughs).